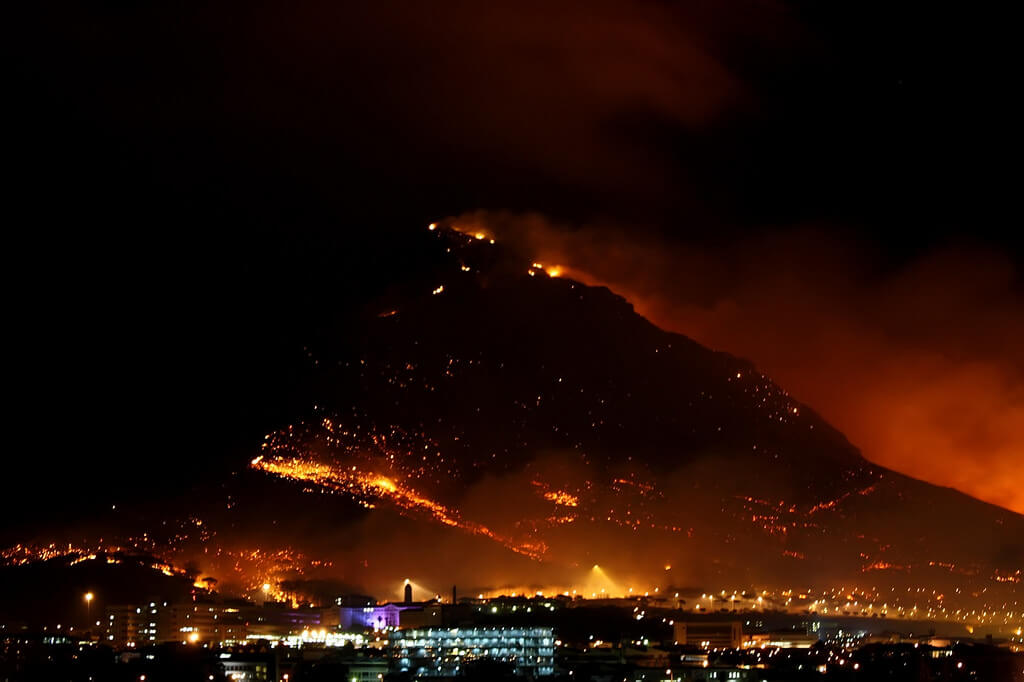 The fine folks at Open Up recently published an open data set of recorded fire incidents in the City of Cape Town, South Africa. I found it quite interesting that such a data set was available, so I thought I’d explore the data a little to see whether I could find anything interesting.

(Clicking the images should bring up a zoomable version)

Firstly, we can see that there’s an overall steady trend in the number of reported incidents, but it can be split into a decreasing trend towards 2013, and increased thereafter. 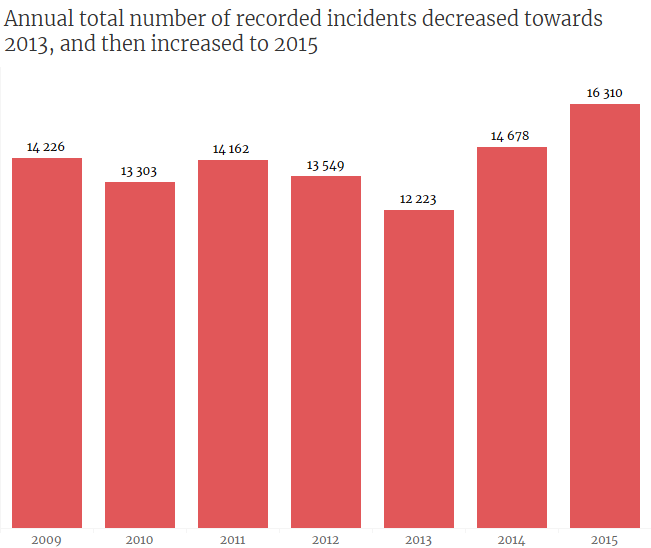 Next, we can see for the total incidents, there is a peak over the summer months (November to March) and a dip over the winter months (April to September). Cape Town’s dry season is in summer and the wet, rainy season is over winter. 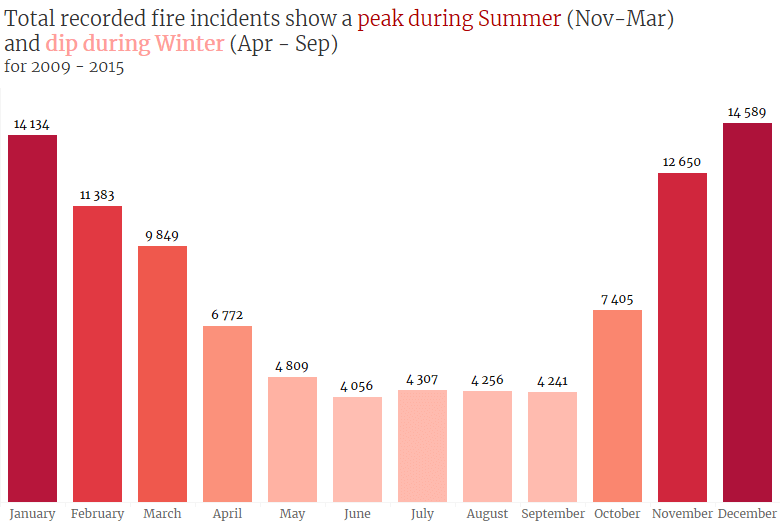 If we dig a bit further and look at individual years, we see the same pattern. 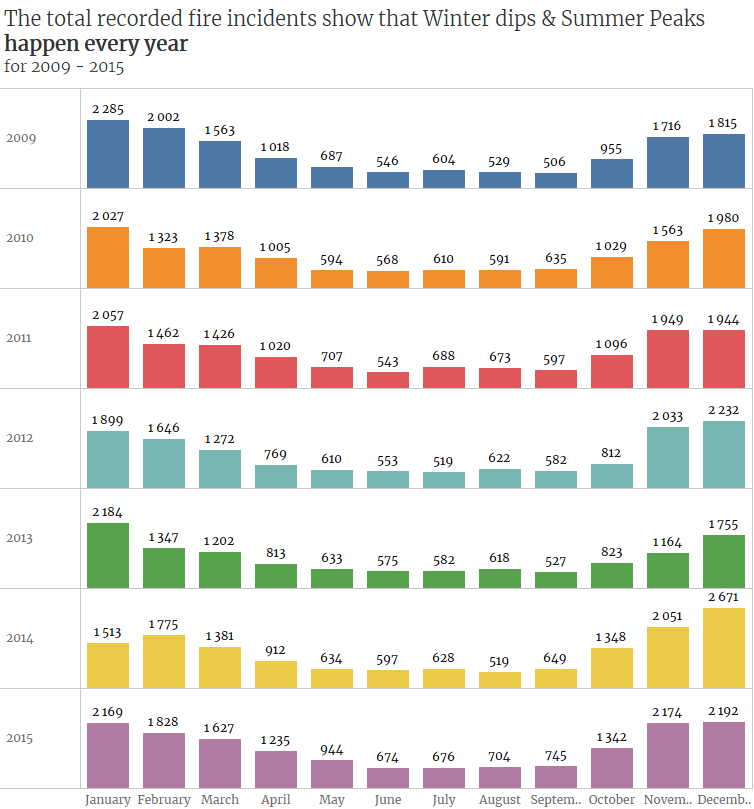 We can also see that most incidents occur in the mid to late afternoon. I also checked the data for each individual year and the pattern is the same. 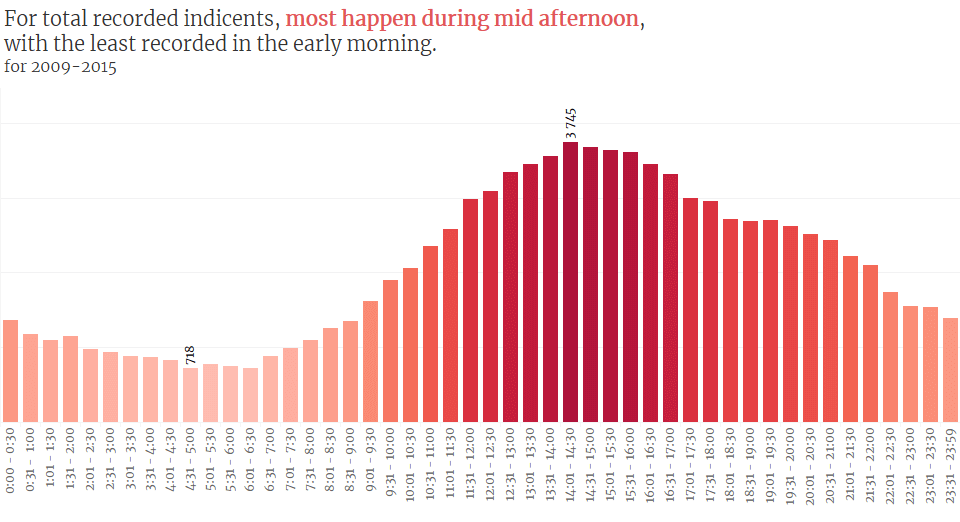 Which stations in Cape Town are the busiest? Here’s the top ten. I hope they are getting the resources they need!

So, what causes most of these fires? Open flames are by far the most suspected. The cases of arson also interested me – being a particularly destructive form of anti-social behaviour. Luckily, these were far down the list. Arson is a particular concern for Cape Town, as they experience devastating vegetation fires, especially during the summer dry seasons.

The next interesting analysis is to look at the outcome of the incident. In most cases, there was a fire and it was manually extinguished – highlighting the importance of fire-fighting personnel. 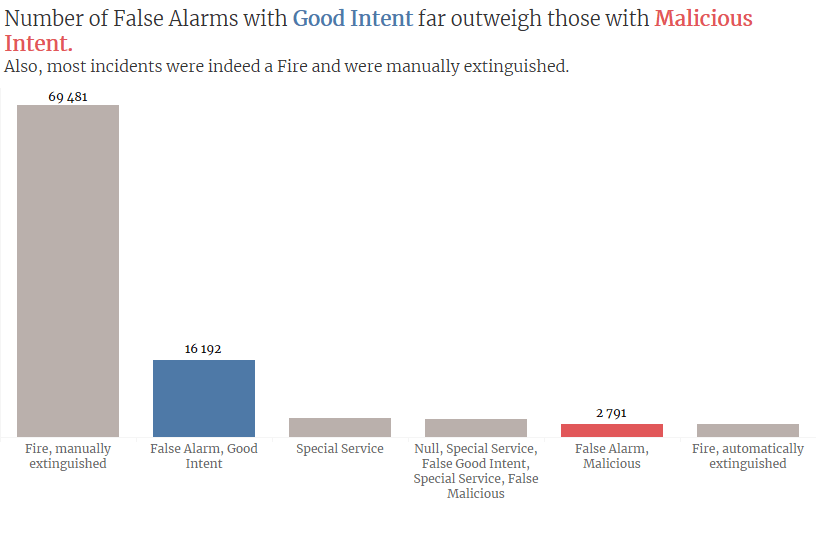 Anti-social behaviour also fascinates me. We can count false alarms with malicious intent as such. It ties up valuable resources responding to such calls. So, let’s dig a little deeper.

Bear mind that this analysis is to help answer questions, but also to find more to ask! I would guess that the proportion of the false alarms with malicious intent as a portion of the total incidents would remain steady throughout the year. 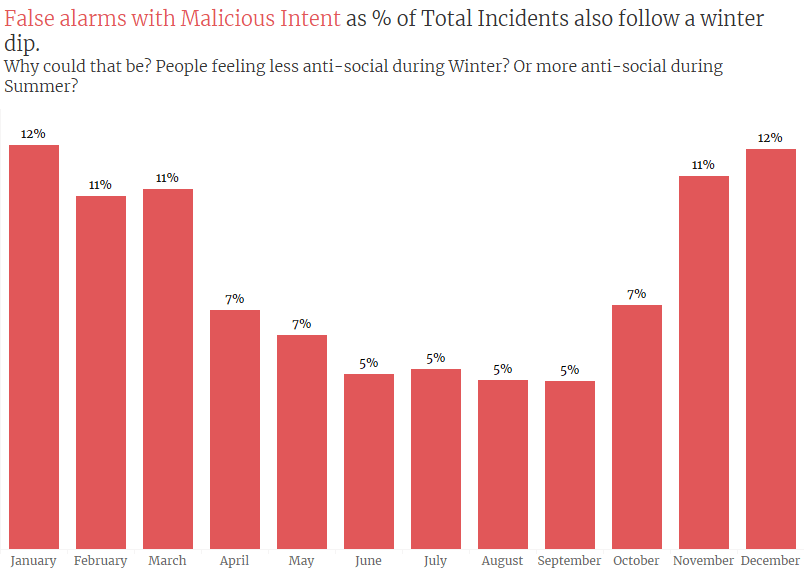 But as we can see, there is also a winter dip. That’s not a dip in the number, but in the proportion, which means it’s more likely that a false alarms is malicious as the total number of incidents also increases. To me it doesn’t make sense why malicious false alarms are more likely in summer than in winter, however my wife made a good observation. Maybe it’s because there are also more real fires, and those making the prank calls see them or the fire brigade and that gives them an idea to falsely report a fire for some reason. So, during winter “out of sight, out of mind” applies?

Where are most false alarms with malicious intent occurring? Here’s the top ten suburbs

Now, I must caution not to read any social commentary into this. I am not very familiar with Cape Town demographics and geography, but I believe some of these top 10 suburbs are of the poorer communities, and there are many dangerous narratives around race and socio-economic status that can be read from this. This is important to keep in mind when analysing data – yes, the numbers do indicate that these suburbs are contributing most to malicious false alarms, BUT all that THIS data can tell us is that we need to guide the fire response teams, as they need to deal with the fire incidents. If we were looking to address the communities, then we would need to look at community data – both quantitative and qualitative. It could be higher because there are simply a lot of people living there compared to other suburbs, or maybe there is no entertainment or diversions etc. There might be some other data point whose correlation strongly points to the causation. One thing I’ve learnt is that one’s gut feel is good for asking the right questions, but NOT for providing the answers.

Anyway, moving on, let’s look at these suspected cases of Arson in a heat map – pun and clever word play intended.

We can see that this again follows the seasonal trends – more in summer and less in winter. Why could this be? Why would arsonists be more active during some parts of the year than others?

I had a look at the data for what was burning. It turns out in arson cases, it was often noted as leaves, grass, and such. That makes sense. Arsonists have more stuff available to burn in summer because of the dry season. If I were analysing this more in depth, I would find out whether someone burning their leaves in the back yard is categorised as arson.

Something to keep in mind – definitions in professional situations (such as firefighting) may not match our own layman’s definitions – so be careful!

From the graph above you can also see that December 2012 was particularly busy for arson cases.

And for our last visual, let’s see at which time of day most arson occurs. 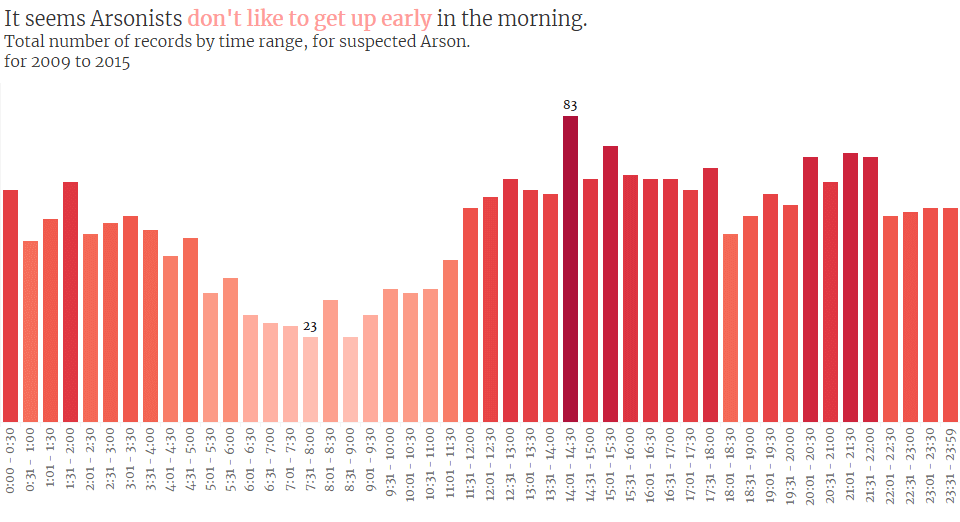 There’s a definite early morning dip, arsonists don’t like to get up early in the mornings!

You can find a copy of the data set (already cleaned up a lot for you), at Open Up – fine purveyors of open data since a few years back.

Note I have taken most of this data face value.

I would usually speak to the data capturers, have a look at the call centres, understand how categorisations have changed over time and so on. I’ve also only used a small sample of columns that seemed self-explanatory to me.  I would also love to look at additional info regarding the population centres, vegetation types, satellite imagery and other sources of fire records to see if more interesting patterns, causes and responses can be discovered.

There was also some data on what looked like dispatch times for fire vehicles, so I could look at the fire station location, and calculate the average response times that incidents would be getting, but without further info it may be an exercise in futility, and I have other things I want to look at😊.

Note that this data is likely to be for when the incidents were recorded, not when they happened. But I’ve assumed that the time between a fire starting, it being reported, and it being recorded would be reasonably short.